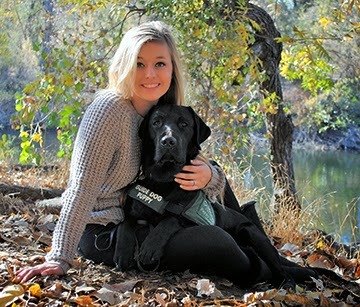 Annually, GDB awards scholarships to puppy raisers in their senior year of high school who have outstanding scholastic achievement and volunteer experience within GDB and their communities. For 2014, we were pleased to award $3,000 in scholarship funds. Congratulations to the following puppy raisers on their accomplishments!

Sophia Hamilton of Ukiah, Calif. has been raising puppies for Guide Dogs for Blind for five years. She has always been a dog lover, and has enjoyed the value and joy of serving others that being involved with GDB puppy raising has brought to her life. She has raised three GDB puppies: Almond (a working guide); Shimmer (a breeder who recently whelped her first litter of 10 puppies); and her current puppy, Fauna, who will be returning for formal training this fall. Sophia has also served as the teen leader of her puppy raising club, Mendocino Pathfinders, for the past two years. In addition to puppy raising, Sophia is also a dedicated student athlete. She is a three-year varsity water polo player and a two-year varsity swim and dive participant. She is a 2014 All American in swimming and diving and the recipient of the 2014 United States Army Reserve National Scholar Athlete Award. Sophia will be attending the University of California Davis in the fall.

Emily Mason of Oakdale, Calif. has raised five GDB puppies: three are working guides, one is in formal training, and her current pup, Cloud. Emily enjoys working with animals, and aspires to one day become a veterinarian. Emily is vice president of her puppy raising club's 4-H program. In addition to her puppy raising activities, Emily has also been the  assistant coach of a little league softball team. Emily will be attending Columbia College, in Sonora, Calif. in the fall.

Maddie Hall, of Castro Valley, Calif., has been raising GDB puppies since her sophomore year in high school. She is currently raising her third puppy, Nevada. Her previous puppies were Eichler and Blaine, both career change dogs and Maddie's pride and joy). As a member of her local 4-H club, Maddie also raised and showed mini Lop rabbits for many years. Maddie will be attending the University of Oregon in the fall.

Caitlin Berge, of Normandy Park, Wash., has been involved in puppy raising since she was 14. She is currently raising her third puppy, Wesley. Her first puppy, Alan, is a working guide, and her second, Havarti, is currently in formal training. Besides volunteering with Guide Dogs for the Blind, Caitlin is also an active participant in her church's youth group, with which she has gone on mission trips for the past six years (this summer she went to Belize, her fourth mission trip to that country). Caitlin received her Associate of Arts degree while still attending high school; she will attend the University of Washington-Tacoma in the fall.

Skyler Howard of Vashon, Wash., has raised four guide dog puppies since she was a freshman: Tanny, Triumph, Berlin, and Whisper. Triumph and Berlin are both working guides. Skyler is a member of the National Honor Society and has volunteered in rural villages in Laos and Peru, as well as at a local veterinary clinic. She plans to attend Carroll College in Helena, Mont. this fall.