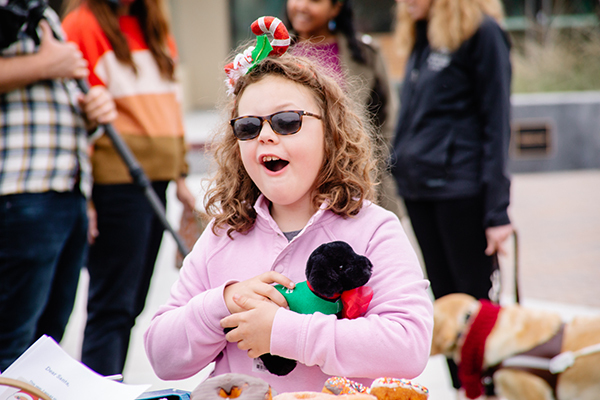 With all those sleigh bells jing-a-ling and ring-ting-ting-a-ling too, we are excited to announce that during this holiday season, Guide Dogs for the Blind is one of the organizations featured in an episode of a new docuseries airing on ABC and Hulu entitled, "Dear Santa, The Series." The six-episode series is a followup to the award-winning documentary film, "Dear Santa," both of which were produced and directed by filmmaker Dana Nachman. Dana is well known and well loved here at GDB - she is one of the filmmakers responsible for the acclaimed "Pick of the Litter" documentary franchise that highlighted Guide Dogs for the Blind, also both in a film as well as a docuseries on Disney+.

"Dear Santa, The Series" is a peek into the United States Postal Service’s "Operation Santa" program, in which children from across the U.S. write letters to Santa and big-hearted “elves” pitch in to help Santa make their wishes come true.

For GDB, our involvement in "Dear Santa, The Series" came in the form of a letter-writing party for several of our young K9 Buddy clients and their families. The families came together at our California campus for a festive afternoon during which all of the children eagerly wrote their wish lists and sent them off to the head elf at the North Pole. Some of the kids even used Braille writers to compose their missives.

"You had the best letter-writing event!" Dana said. "The kids were so adorable, and they asked for such fun things."

In addition, GDB's own Jane Flower (our youth outreach specialist), was chosen to be an elf! She - along with her guide dog, Pilaf - got to help Santa package up and send gifts in response to a letter received via "Operation Santa."

"It's a lot of people coming together to help someone else, and it's really touching," Dana said. "I'm really thankful that places like Guide Dogs for the Blind trust me with their stories. It's a hard thing to have films and TV shows made about you. It's scary, I'm sure. So I really appreciate the trust."

"Dear Santa, The Series" will be aired in markets nationwide sometime after December 4th (check local listings), and also available on Hulu. We hope that you will tune in to check it out!

Learn more about "Dear Santa" on our podcast, Central Bark, featuring Dana Nachman as a guest.