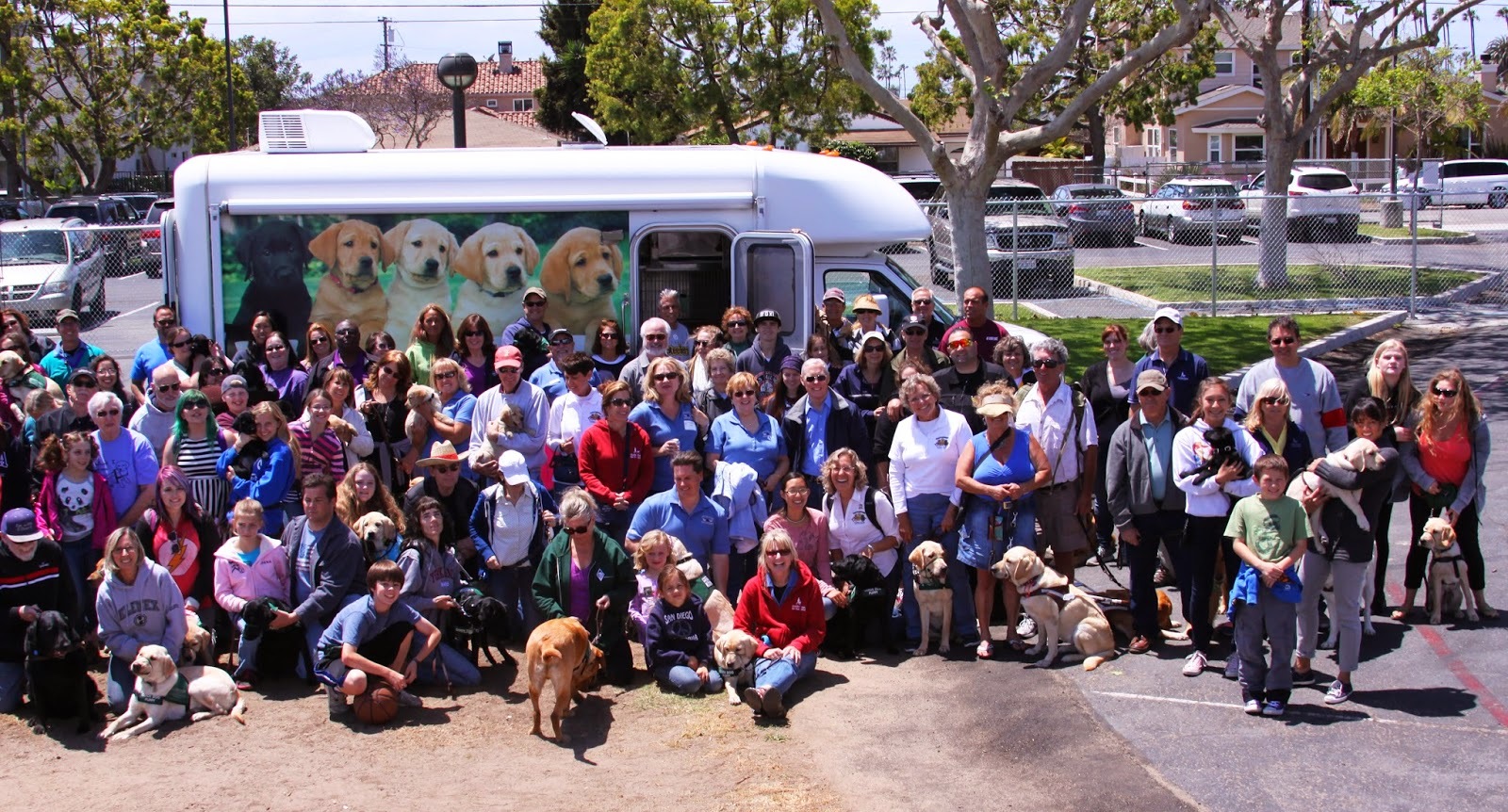 Finally the weather report said we are going to get rain – something we have been longing for in Southern California for a while. However, GDB Fun Day in San Diego was going to take place that Saturday, so I'm sure the GDB puppy raisers, guide-dog/ handler teams, and all the new little puppies were hoping the rain would stop before then.

It rained hard all night, but when my guide-dog Jura woke me up early to eat her breakfast, the rain had stopped. “Good,” I thought to myself...but, when I opened the back door to relieve her, I felt a blast of cold wind and the yard was soaked. As I was getting ready and sipping my coffee I thought, “I hope it warms up and it doesn't rain” – the puppy raisers had worked so hard on the preparations for this special day.

By the time everyone got to The South Oceanside Elementary School, where the event was held, the day began to blossom. The Fun Day kicked off with Starbucks' coffee and breakfast snacks as another beautiful day in paradise had begun. The sun came out, and more folks and puppies were popping in – puppy raisers had wasted no time in getting the word out! Some had their guide dog puppies, while others had career change dogs. Pat Salzarulo, a puppy raiser from San Diego, was there with her career change dog Cabo who is now a therapy dog. He works at the court houses in San Diego and his job is to sit at the stand with the children who are testifying in front of the judge and jury. Cabo's presence helps to calm the children, so that they can give their testimony. Along with Cabo, Pat brought her new yellow Lab puppy in training, Sabrina. Guide-dog/handler teams from our GDB Alumni Chapter – San Diego Surf Dogs were there: showing off their beautiful guides, displaying electronics for the blind, and making braille name tags for donations to help the clubs. The Oceanside Police were also there with their rescue dog, an intelligent German Sheppard who was demonstrating his important job.

The Puppy Clubs from San Diego, Temecula, and Orange County held an auction and brought an array of gorgeous baskets, ceramics, paintings and homemade doggy beds! After a yummy lunch, it was the main event – the distribution of the new guide dog puppies. The GDB Puppy Truck with seven puppies arrived and everyone gathered. GDB Community Field Representative Rick Wilcox began announcing the puppy raisers' names and introduced the puppy they would be receiving. And yes, the puppies were adorable and it was so exciting! I saw at first hand the joy, instant love, strong dedication, and the solid bond between the raisers and the puppies.

Sharing this time with our puppy raisers exposed me to a clearer vision of what GDB is all about: the giving and taking, the donations that run the program, the puppy raisers that play such a major role, and the guide dog handlers who are able to expand their life to new challenges – we are all playing an important role in crucial situations and the rewards are endless.