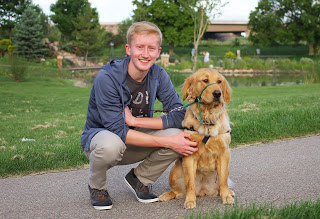 On May 31st, 2015, I will have to walk Pasha, the female golden retriever I am currently raising, up on to the puppy truck, placing her in a crate and say my goodbyes. It will be an intensely emotional time, and I am certain that I will be deeply saddened. I'll say goodbye to Pasha, however, knowing that she'll make someone's life so much better, not just as a guide but also as the friend I know her to be.

Fundamentally, Pasha will become an excellent service dog. She has the unique combination of two traits; her extreme desire to please people and her absolute love of food rewards. Beyond being a working dog, however, she'll make a lifelong companion. Pasha is the happiest being I have ever encountered. I have raised before, and while she wasn't the best behaved dog I ever had (at first), I had never seen any dog with the level of enthusiasm, joy and pure happiness that exists daily in Pasha. Every person she meets is instantly a friend; pet her and you're automatically at the top of the list. Because of this, raising Pasha has allowed me the opportunity to greatly impact other people both in my personal life and the community as a whole.

I attend West High, an inner-city school with nearly 3,000 students. It was in class and in the halls that I first realized exactly how special Pasha is in her interactions with people. On a daily basis, while I am in class, people who have had a rough day, are stressed about a test or are just generally in a bad mood will sit down on the floor with Pasha, who instantly walks up to them and nuzzles her way onto their lap or by their side, where she rolls over and falls asleep. It is the universal and unspoken truth that very few things cannot be fixed by a few minutes rubbing the tummy of a dog, and Pasha provided that service willingly and unquestioningly to many fellow classmates. To be fair, the other puppy I raised, Muir, first demonstrated this concept to me. Every day on my way to class, I walked by the special ed classrooms, and one severely autistic student stopped to pet Muir every time he saw him. I never spoke to him, never learned his name and never knew anything about him other than the fact that his eyes lit up every time Muir came trotting down the hallway. This was my first experience in understanding the power that these dogs have, and the first time that I truly felt that I was having a positive impact with the people around me. Two years later, I learned that Pasha not only embraced this concept of companionship, she loved it.

My mother works with the school district, coordinating plans and accommodations for students who are disabled or require special attention in the classroom. She spends considerable time at a school called Parkview Elementary, where the district houses its extremely disabled program classrooms. Recently, I took Pasha to visit several classrooms at Parkview. The first classroom I visited had kids who were being monitored for potential learning disabilities, and were, on the surface, perfectly normal kids. They loved Pasha, and spent lots of time petting her, laughing and occasionally pulling on her tail. Despite all of the young and excited people surrounding her, Pasha remained calm and loved the attention. From there, Pasha and I stopped in two more classrooms, each time repeating the regiment of petting, laying down and demonstrating some of her obedience commands. Our final stop was is considered the highest tier of attention, where educators match students one to one. It was in the classroom that we met with students who were quadriplegic, had birth defects or had other highly special needs. I was somewhat nervous, as I was unsure of how Pasha would respond to the large, electric wheelchairs, necessary support equipment and the shaky and unpredictable actions of the students themselves. My fears, as it turned out, were completely unfounded, as Pasha stuck to her default of greeting everyone with an open heart and wagging tail. While I abandoned the short speech I had gave in the other classrooms on what Pasha was and the organization she was being raised for, the students nonetheless saw, or in the case of the blind girl there, felt, the effect of service animals and Guide Dogs for the Blind.

My time raising two puppies for GDB has influenced the lives of others not only through meeting the dogs themselves. Working with GDB has been a core part of determining who I am and who I want to be. Committing to such a large service project has inspired me to do work with other organizations in my community. Last summer, after completing 80 hours of local community service, I traveled to Cambodia, where I spent several weeks building a preschool and giving free English lessons and seminars to the public. I have also continued my work with the Utah Refugee Committee, a nonprofit aimed at acclimating refugees to their new lives in Utah, and with the Humane Society of Utah, fostering cats and kittens in my home while also working at the shelter walking dogs and working community outreach events. I know that my experiences with GDB over the past three years have had a permanent effect on my attitude towards volunteerism.

I will be attending Northeastern University this fall, a private college in Boston. There, I will study Honors Mechanical Engineering, hopefully working with a partner of Northeastern, Tesla Motors. While my career path is far from set, I hope to pursue automotive engineering, designing and testing cars. More specifically, I am interested in the electric racing field of automotive engineering, and aim to build electric powered sports cars for either mass production or racing events. While these objectives may seem dichotomous from my work with Guide Dogs for the Blind, in actuality it is the patience and dedication I have learned from raising two puppies that I believe will be crucial to helping me achieve my goals. I know that wherever I go, no matter what I do, service to others and being an active member of my community will be crucial.

Simply put, there is no way that I could quantify the number of people the guide dogs that I have raised have effected, nor the degree to which they have affected them. Dogs have the enormous capacity to change someone's attitude in a matter of seconds. While I have highlighted a few examples of what Pasha and Muir have been able to do, these are only the interactions I have remembered. There must be countless of interactions, be it a friendly wag or loving kiss, in which Pasha made someone's day better. Muir's quiet stoicism served as an emotional rock for those that knew him well, and he emanated his stability to strangers constantly. I wish that I could number the people they have touched, or attempt to convert their effect into something tangible. For now, however, I must rest with the notion that for all of the good that they did to those around me in the year that I had them, they will be doing years and years of good in the future.