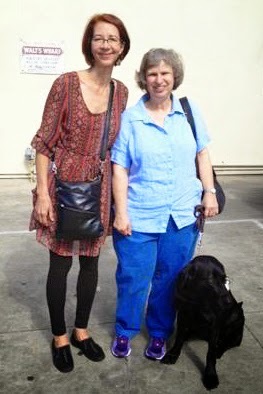 On a recent trip to the Los Angeles area with my four year-old guide dog, Lava, I arranged to meet Lava's two Guide Dogs for the Blind (GDB) puppy raisers at a restaurant in Seal Beach, CA. Both of these women are members of the Brea Area Adult Raisers Klub (BAARK) of Orange County. Mari had spent time with Lava and me at our GDB graduation in 2012; Renee, I had not met before. I was excited to see both of them! As Mari and I chatted, Lava suddenly became very excited, sniffing the air and prancing around; behavior uncharacteristic of her when she's in her working harness. The cause of this activity was the arrival of Renee, Lava's puppy raiser from eight weeks to seven months of age, whom Lava hadn't seen since then. In spite of her evident excitement, Lava then demonstrated great restraint by obediently lying under the table until the meal was over. Then, with permission, she acted like a puppy again, nuzzling and licking her first puppy raiser while obviously enjoying some familiar scents and happy memories. This was so touching to watch, and I know it meant a lot to Renee to be so fondly remembered.

Mari, Renee, and I traded Lava tales. The women explained how they helped her develop proper guide dog behavior. I am in awe of all the puppy raising families; they lovingly care for the dogs and then generously send them to live with those who truly need them. During Lava's time with Mari's family, they took her to as many public places and events as possible; they helped her remain calm and focused.  She can now lie quietly for hours at a play, musical performance, or movie. Waiting in line at the bank, I may get annoyed, but the waiting doesn't seem to bother Lava at all. She is also patient while I'm grocery or clothes shopping, at long meetings, or when I stop to talk with friends on a walk.

After leaving the restaurant, we all strolled along the nearby pier. The puppy raisers walked behind Lava and me so that they could see her at work. The pier was crowded with people walking, taking pictures, and fishing with their rods and pails. There were many seagulls flying and diving all around us, and little children running and shouting with glee at the crashing white waves and the sparkling water. The puppy raisers looked on with pride as Lava ignored the distractions and maneuvered around all obstacles with ease. They were like proud parents, acknowledging that Lava is now able to take care of both herself and me with confidence and joy. I am so happy that we three women made the effort to get together to share our love of Lava and celebrate both her and our accomplishments.