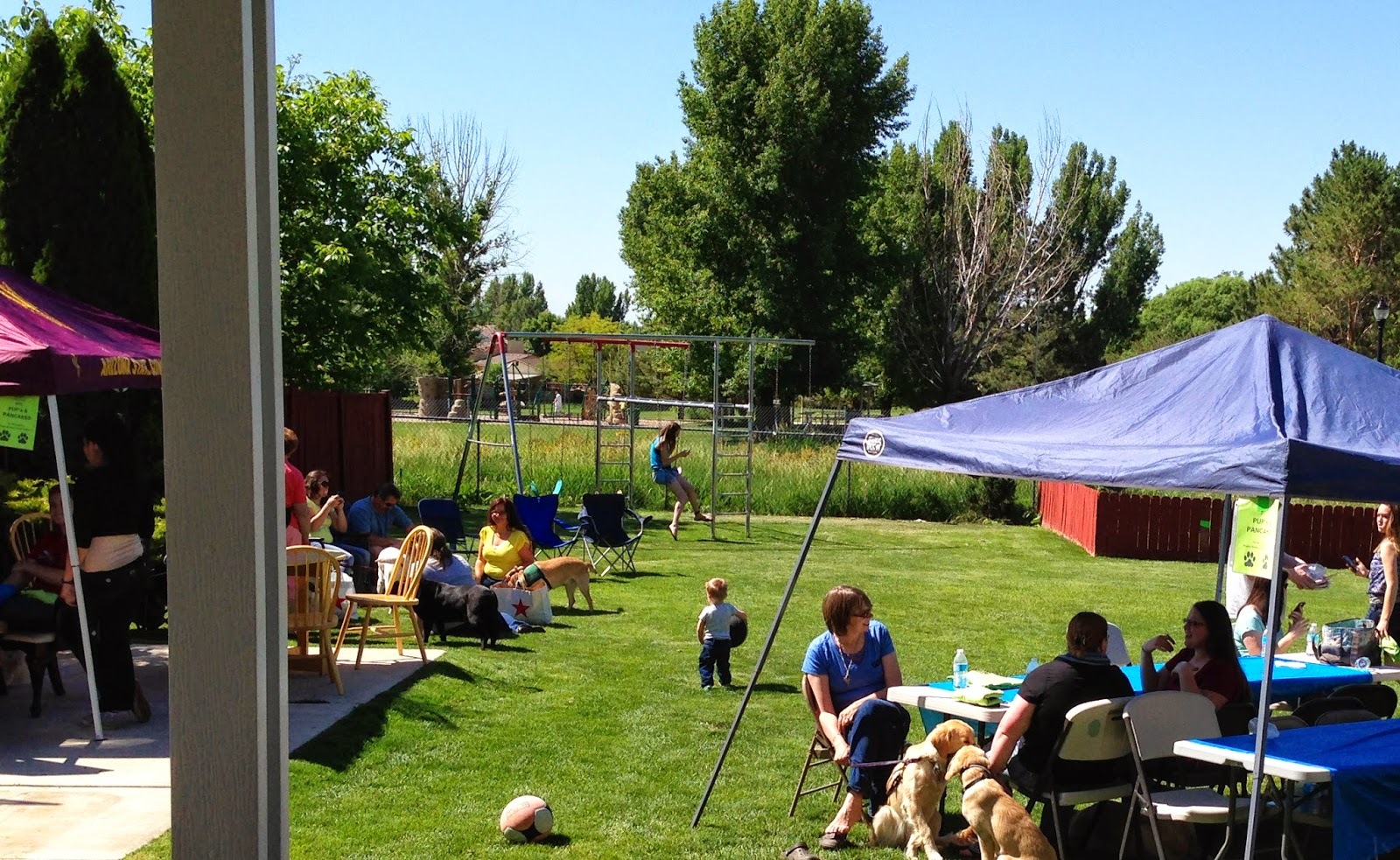 The Greatest Paws on Earth (Utah Alumni Chapter) recently hosted an appreciation breakfast for all the awesome GDB puppy raisers in northern Utah. The event was held at the home of Chapter President, Scott Wilcock and his guide, Senator in Harrisville, Utah. There were nearly 30 dogs and more than 50 people in attendance.

It was a beautiful and cool summer morning in northern Utah when all the two and four-legged invitees began arriving for the breakfast. A distinct aroma of blueberry pancakes and sausage permeated the entire house as steam billowed from the camp-chef griddle in the backyard. The guests made their way through the house to open back doors where the savory odor was coming from.

To complement the pancakes and sausage which were donated by the Harrisville Walmart; the buffet table also offered bacon, egg & cheese bagel sandwiches, cinnamon rolls, blueberry and chocolate chip muffins, bananas and fresh fruit kabobs. With plates full of goodies in one hand and leashes in the other, attendees made their way to one of eight tables that were covered with bright blue tablecloths. The group enjoyed the good food and good conversation while the canines enjoyed being together and chillaxing in the shade provided by several canopies which were set up over the tables. The inviting, cool, green grass was a welcome reprieve for the working dogs and guide dog puppies in training. There were also a few retired guides and career change dogs in attendance and they all seemed to enjoy the companionship of other animals that devote their lives to helping and serving humans who need their help.

After breakfast and while some were working on seconds and thirds, GDB instructor Danielle Alvarado shared a few words with the group and focused on important training elements for the puppy raisers to work on. She answered questions from both the handlers and the puppy raisers.  Before and after her talk, she spent a lot of time, one-on-on, with many of the attendees addressing individual questions and offering suggestions. Danielle's participation was a key component of the over-all success of the event.

After Danielle's presentation, eight names of puppy raisers were drawn and door prizes were awarded. Thanks to GDB for the logo items they provided and the guide dog handlers who provided several $20 and $30 gift cards to Petco. After the door prizes, Scott Wilcock presented each of the puppy raiser groups with 30 custom made tee shirts, which were donated by the Utah alumni of GDB, for each of the puppy raisers who provide countless hours and resources of their own to raise these amazing dogs! The shirts were lime green with dark purple print on the front left chest – a block that read “GDB UTAH” and on the back a large GDB logo illustrated by the guide dog team walking and a large bold statement underneath the logo which reads “PRIDE IN PAWS” with the word “in” reversed out inside of a dog paw print. Everyone loved the shirts and Scott also presented a shirt to Danielle for her to take back to San Rafael.

The entire morning was a lot of fun for all who participated and no one left the event feeling hungry. Good information was shared and extreme gratitude was expressed to the puppy raisers for the awesome labor of love provided each and every day. There were even a couple of romances that seemed to blossom during the event; Butch, a yellow Lab and Daniel, a black Lab seemed to take a keen interest in each other and can't wait for the next get-together!