The Generosity of Raising a Guide Dog Puppy 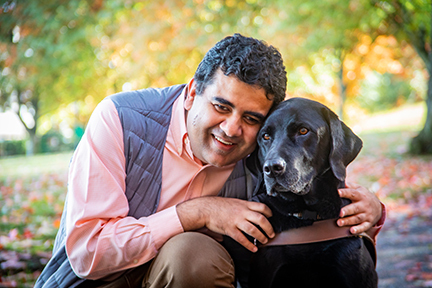 When my name was called out, I moved towards the podium with my guide Tashi, a black Labrador Retriever. Walking beside me was Allison. Tashi and I were at our graduation ceremony to mark the end of three weeks of training at Guide Dogs for the Blind. But, I had only just met Allison, her two younger sisters, and her parents, who together had raised Tashi.

Allison had been overjoyed to receive the 10-week-old Tashi, and been heartbroken when the truck had rolled up to take him back for the final stretch of training. In between, she and her family had prepared Tashi for guidework, shaping his behavior at home, in the mall, on the bus and plane, in grocery stores as well as in restaurants. Standing next to me, Allison looked at Tashi with pride in her eyes. I, on the other hand, was struggling to articulate my gratitude to this stranger and her family who had shown me so much generosity.

Today, thousands of Americans continue to volunteer to raise and train puppies for service dog schools. They sometimes come together to form clubs in which they offer advice and support to fellow puppy raisers. By doing so, they reenact the great American tradition of forming associations to meet shared objectives. Observers of our society have for long regarded this behavior as a strength because it teaches people to trust each other and build social ties. These bonds of trust also extend beyond puppy raising clubs. Consider what raisers do: They invest time and affection in a puppy. And then they give up the dog for a stranger. For those dogs who complete training as a service dog, the raiser has no say in who their dog is assigned to. The raiser does not know the race, religion, gender, or the political affiliation of the service dog handler. The dogs are matched to the handler by the service dog organization. In fact, the first time the raiser meets the handler is when the guide dog and the handler team are about to complete their training. This remarkable experience of strangers being connected by ties of generosity stands in sharp relief to our fraying social ties.

Social scientists fret that civic behavior in America is in decline in these times of busier lives and digital distractions. Membership in traditional organizations like religious groups, labor unions, veteran organizations, and Lion and Rotary clubs that traditionally brought us together has been falling for a long time.

Instead of bowling together, we are more likely to bowl alone, and in the process, these days, we trust each other less. To add to it, our beliefs cleave along party affiliation, and these divisions are turning personal. Research finds that Democrats and Republicans, for example, disapprove so much of each other today that they are more and more opposed to their child picking a marriage partner affiliated to the other party. Political divisions, as our recent elections and the associated tumult have illustrated, have turned sectarian. We may be distracted and divided, but across blue and red states, some of us still come together to raise guide dogs for strangers who may not share our identity and political beliefs.

Tashi and I have been a successful team for nine years now. Nearly eleven, he is approaching retirement. Allison, Megan, and Clara were kids at school when they fell in love with Tashi while raising him as a guide dog. How they, at such a young age, were able to let go of this beloved puppy for the sake of someone they had never met is a gesture I still struggle to fathom. Yet, service dog schools will tell you that this generosity is more common than we think. Even as I write this, someone unknown to me is already showing me the generosity of raising my next guide. To any dog handler, the contributions the raiser, the service dog school, and their supporting donors make to their life is transformative. But the mission of training service dogs to change the lives of strangers also contributes to the larger and increasingly urgent cause of building social trust.

Amit is an Associate Professor of Political Science at the University of California at Santa Barbara. He is a member of GDB's Board of Directors.