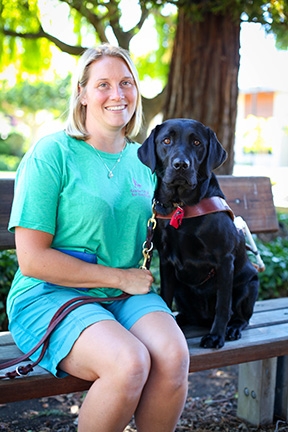 Amy Salger lives in her hometown of Vinton, Iowa with her husband, Matthew, their two sons, Gavin and Reagan, and her first guide dog, Marsala, a black Labrador Retriever.

As a Certified Alcohol and Drug Counselor, Amy currently works primarily with adolescents and youth as a substance abuse counselor. She holds a Master’s Degree from the University of Northern Iowa in Clinical Psychology and Bachelors of Arts Degrees from Coe College in Elementary Education and Psychology.

Active in her community, Amy volunteers at her sons’ schools; is a member and past President of TTT, an organization committed to providing girls with the opportunity to attend camp; and has been involved for over 12 years with PEO, an organization that promotes the education and growth of women. As a member of Trinity Lutheran Church, Amy serves on the Board of Directors and as the Chairman of the Christian Education Board. Amy and her husband are part of the Guide Dogs for the Blind Legacy Society. She frequently gives talks to area schools and community organizations about the guide dog lifestyle.

Amy’s greatest enjoyment in life is spending time with her family and friends. She also enjoys reading, shopping and traveling. He is co-founder and President of the International Association of Visually Impaired Technologists, a non-profit that promotes employment and career advancement in the field of Information Technology for people who are blind or visually impaired. John is also active in his local NFB chapter - NFB of Dane County Wisconsin. He is past- President of the Madison Central Lions Club.

In his spare time, John likes to spend time with his wife, Judy, and their string of rescued Basset Hounds. He enjoys running and rock climbing and is an avid Green Bay Packers fan. Deanna is currently working with her second guide dog, yellow Labrador retriever Mambo. She works for Clovernook Center for the Blind and Visually Impaired, a local blindness agency/Braille Print House, as a Receptionist and has recently started her own pet-sitting business. Deanna is a Licensed Massage Therapist, working for chiropractors, clinics, and spas for over a decade. Her previous guide dog, Pascal, acted as the honorary office mascot.

Deanna is committed to volunteering and has served as President of the Ohio Association of Guide Dog Users since 2010. She is actively involved with GDB’s Alumni Chapters as a co-founder and past President of the Guide Dogs Handlers of the Midwest and Secretary for Guide Dog Handlers All Ways. She has held a range of Board leadership positions with both the National Federation of the Blind (NFB) of Ohio and the NFB Cincinnati Chapter. Deanna also volunteers with a local animal rescue and acts as a role model and mentor for blind youth. 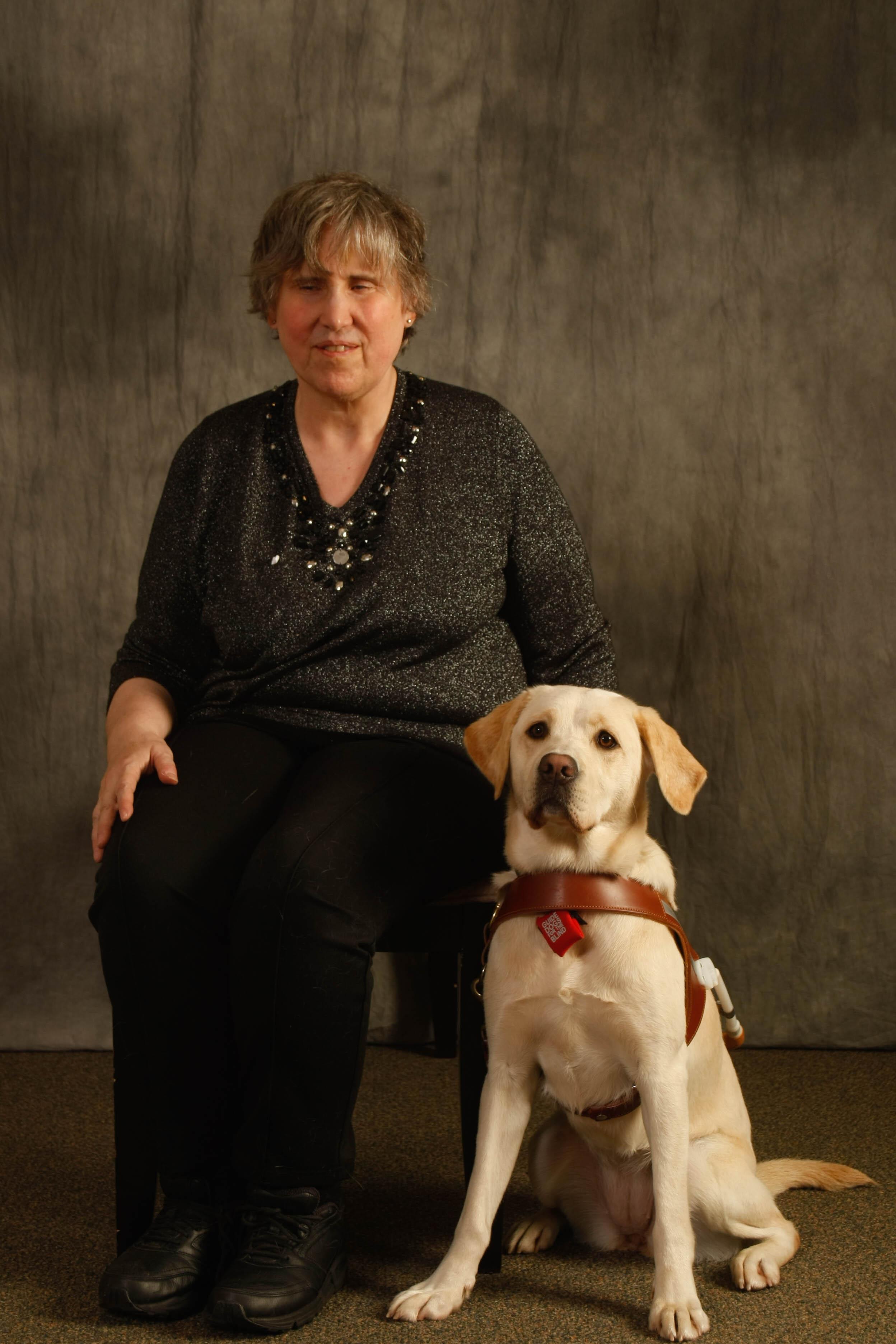 Throughout her working life, Deb has served the Blind and Visually Impaired. From direct training and services to technology and accessibility needs, Deb has worked tirelessly to help people with visual and hearing impairments improve their lives through access and independence.

Deb’s mission has always been to serve. Throughout her adult life, she has volunteered and been active in state and federal organizations and agencies that serve the Blind and Visually Impaired. Over 37 years, Deb has taken on the roles of Rehabilitation Teacher, Vocational Rehabilitation Counselor, Civil Rights advocate, It and assistive technology administrator.

One of Deb’s motivations to serve on the Alumni Board is to improve the availability of Guide Dogs for our aging population of GDB teams. 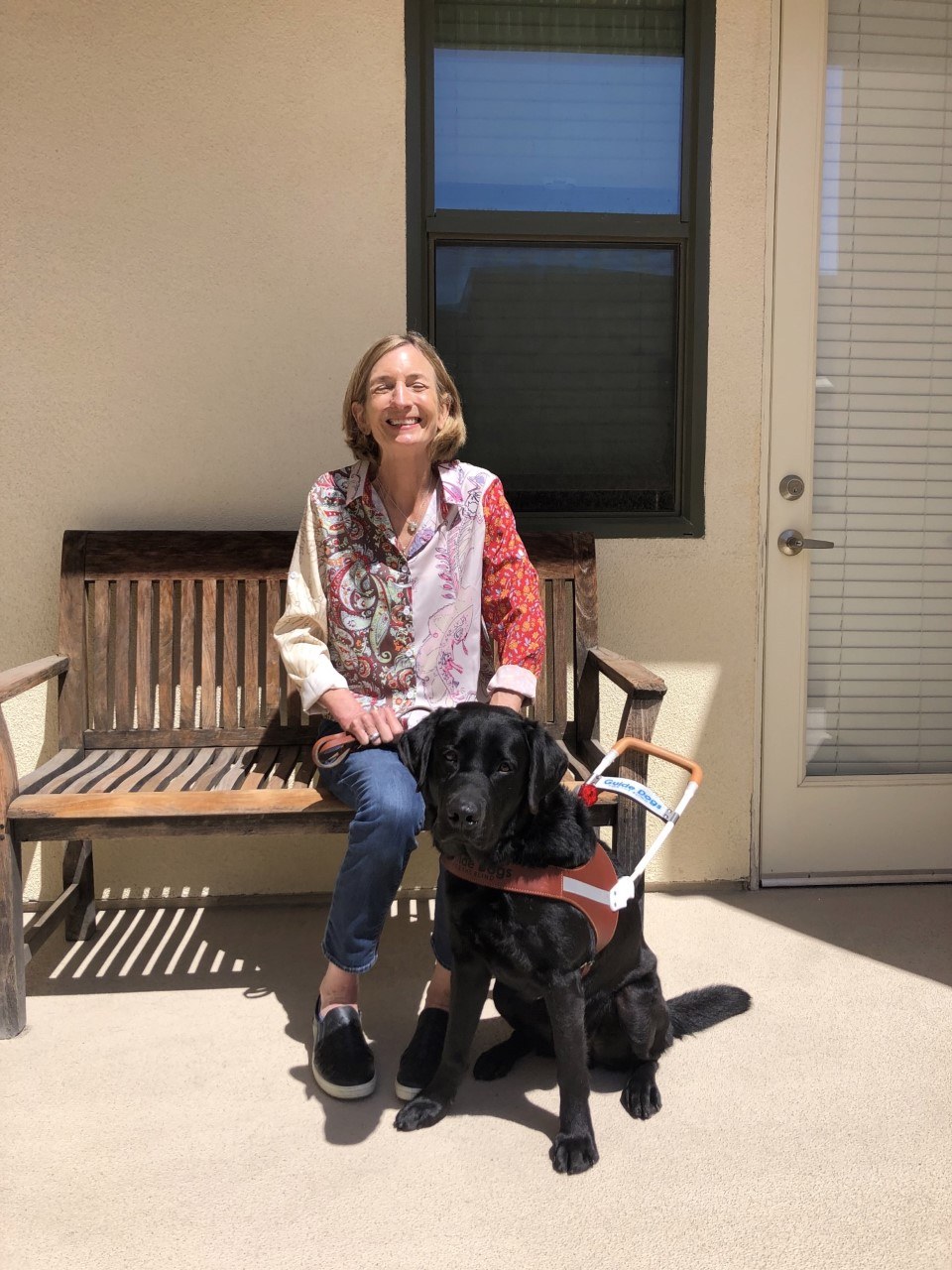 Over the course of her career, Kelly has designed and directed B2B / B2C sales, marketing, and recruiting campaigns, to drive rapid and sustainable growth. She worked to build and lead cross-functional teams and performance initiatives, maximizing productivity and increasing market share for Be My Eyes, Sprint Accessibility, HirePotential, Inc., The Novo Group, Alternative Resources Corporation, and more.

Kelly and Caspian live and work in San Diego, CA. Lui is originally from Alberta Canada but currently lives with his wife and 4th guide dog Reid in Halifax Nova Scotia. He has had a long and varied career and has worked for the CNIB (Canadian National Institute for the Blind) since 2011 as Manager of Regulatory Affairs. In this position, Lui prepares interventions for numerous regulatory bodies including Finance Canada, the Canadian Transportation Agency and the Canadian Radio and Television Commission.

Although the pandemic placed serious limitations on everyone’s abilities to participate in community gatherings, Lui has recently joined the Dartmouth Rotary club, is learning the art and skill of sailing, and has joined the Halifax Yacht club. 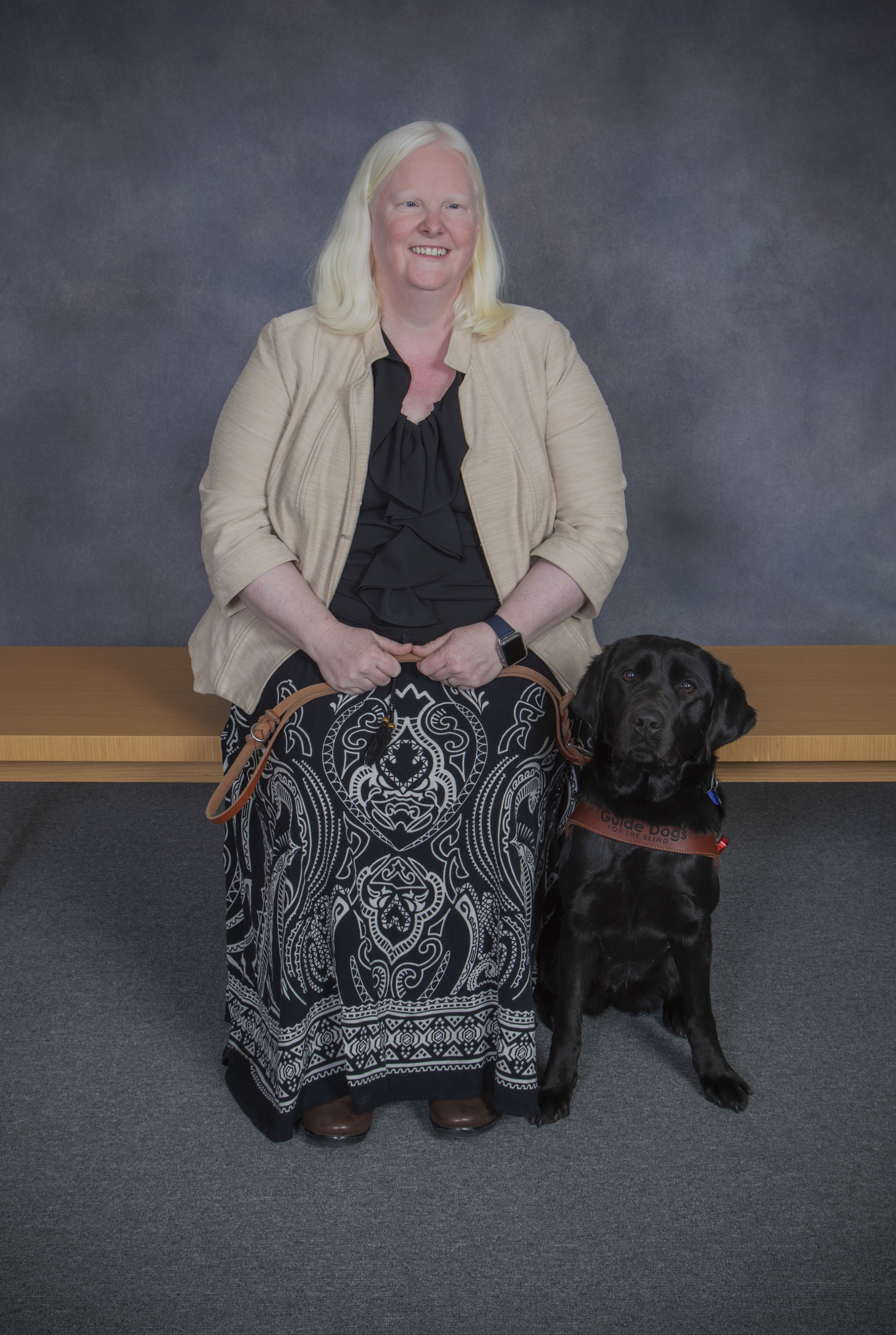 Leigh currently lives in Austin,Texas. After many years as a teacher and an administrator of a charter school which she co-founded, Leigh found she is best suited to the atmosphere and opportunities of a smaller school community. This led her to her current position as the administrator of a small preschool.

She has her first guide, Aviva, as a direct result of watching the movie “Pick of the Litter” on the recommendation of a friend. Watching the teamwork depicted in the movie helped Leigh think more positively about the challenges she faced as an individual whose vision was gradually decreasing. She realized that she would be more safe and also more comfortable being partnered with a guide dog.

Leigh enjoys the outdoors and has spent many summers camping in North Carolina with her family. She is interested in starting a GDB book club as an alumni chapter. She is also hoping to learn pottery soon. After a long career as both a coach and competitive athlete, Cheri Owen now volunteers as a Life coach and mentor to student-athletes on the Division I Women’s Basketball Team at UC Santa Barbara and provides mentoring support to athletes in other sports on campus. She is also a Veteran Advisor offering one-on-one assistance to veterans having difficulty navigating the VA health system, and is establishing an activity program for disabled veterans that integrates training in boxing with the socialization of having lunch together.

As a veteran of the U.S. Airforce, Cheri was eligible for rehabilitation services from the VA when she began losing her vision. Of course as is so often the case, she wanted none of that. Fortunately, friends convinced her that she might be able to get a guide dog if she got some orientation and mobility training and so she reluctantly agreed to enroll. To her delight, she not only got the travel training she needed, but learned that there were many new skills and adaptations that would allow her to resume many of her previous activities and begin new adventures. Cheri has health challenges in addition to vision loss and believes it’s important to “work in the space you have at the moment.”

Cheri is partnered with her first guide dog Martinez. Together they navigate the campus and community where she volunteers. 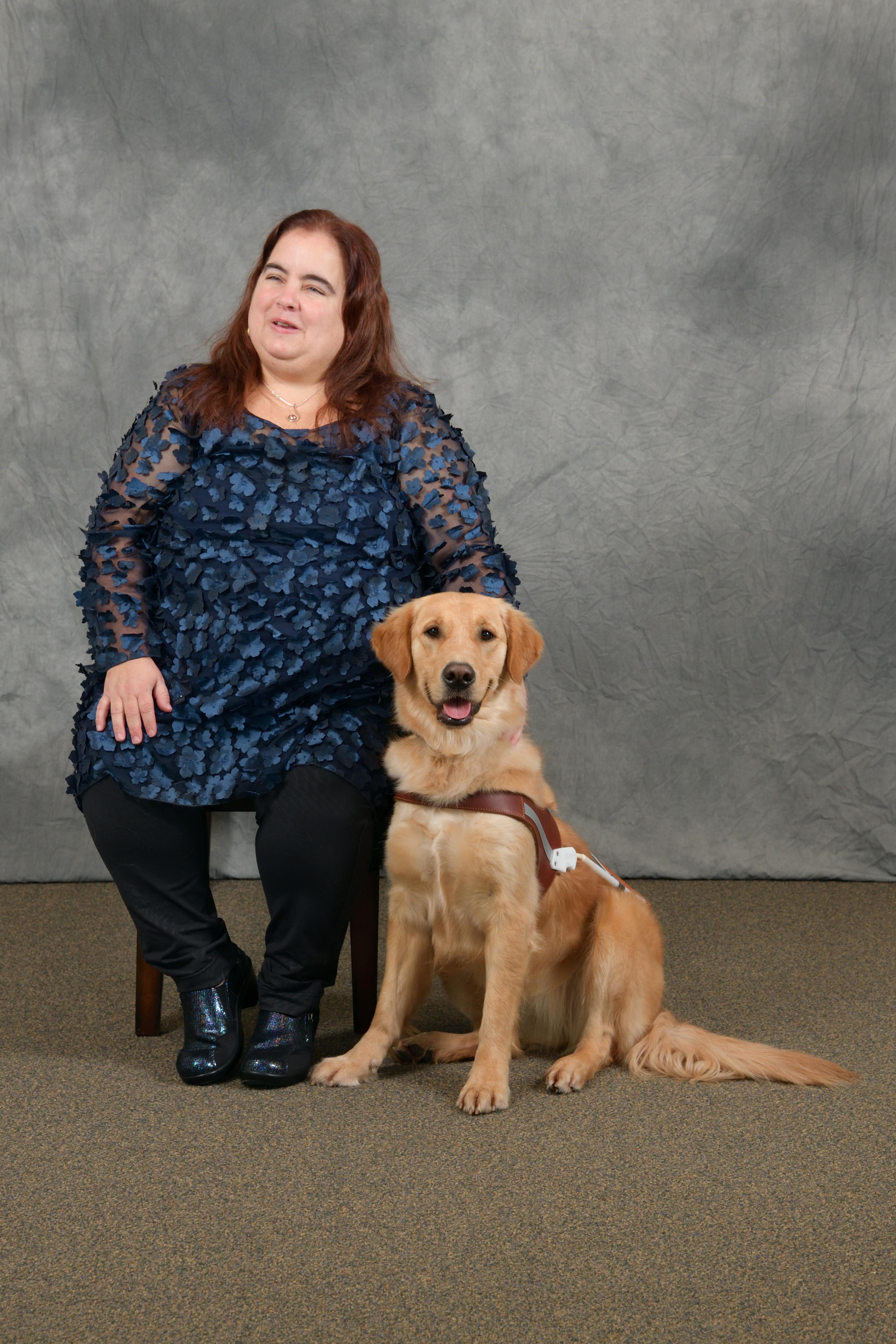 Maia has been happily partnered with four different guides, each helping her find the way through adventures on foot and in spirit. Maia’s fourth Guide Dog, Gleam, works closely by her side.

Maia has a Master’s in Fine Arts and interdisciplinary arts. She works as an arts educator, and recreational therapist for children with disabilities. She also works as a bodyworker, college accessible arts instructor, and interdisciplinary artist. Throughout her work and daily life, Maia is committed to social justice, civil rights, equity, and access to creativity.

She combines physical, mental, and social dynamics through her workshops, community events, books, public speaking, and private work. Maia brings a creative spirit, quirky sensibility, love of words, and the desire to push the boundaries of “possible” to the Alumni Association. 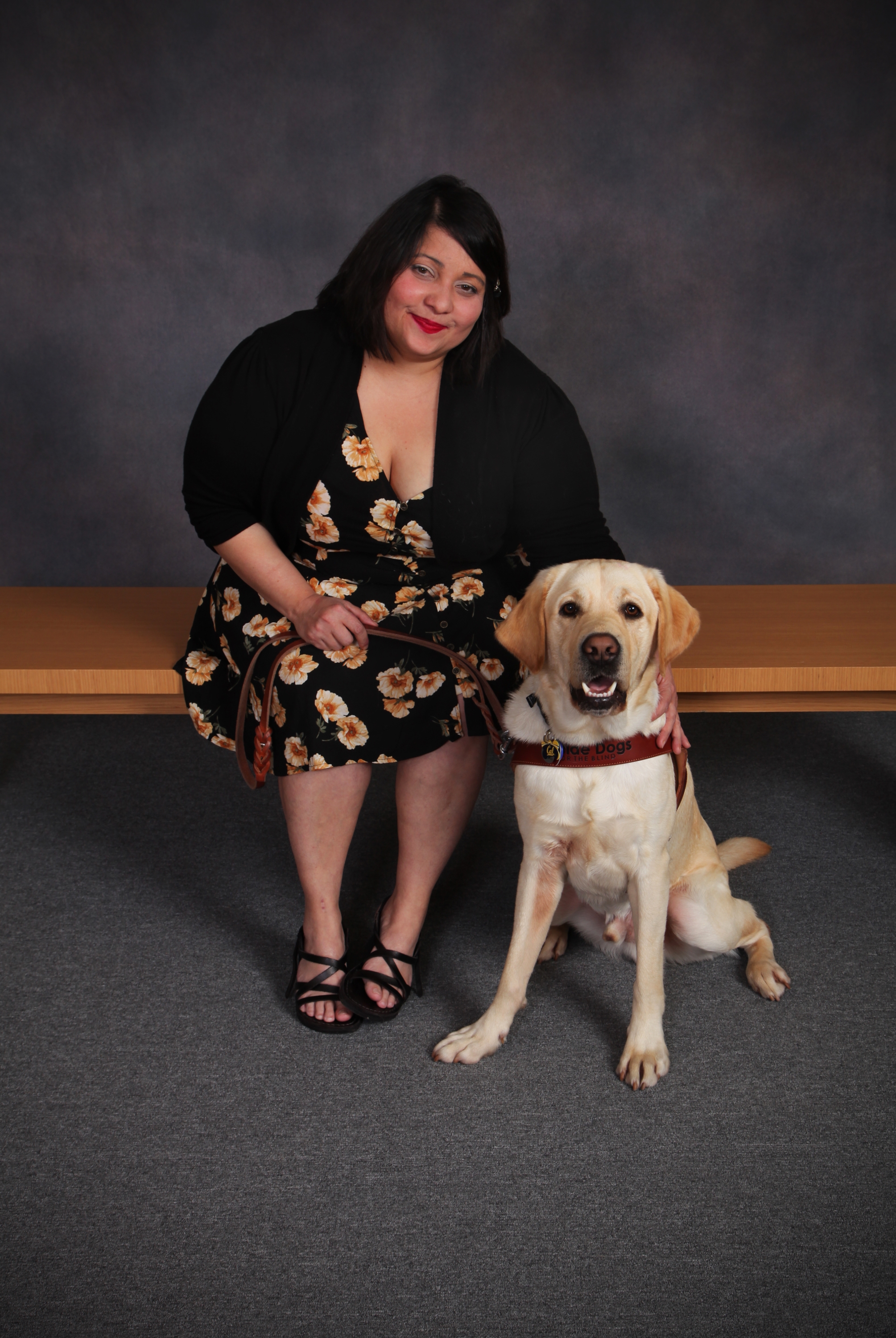 Melba’s professional work is rooted in the intersection of culture, disability, communication, and ethics. She holds her doctorate in philosophy and is an associate professor at Grand Valley State University, Michigan.

A bold and vocal communicator, Melba has created programs surrounding communication and culture, authored books, published articles in peer-reviewed journals, and presented papers at conferences in her field. She steps outside the boundaries to bring philosophy, dialogic inquiry, culture, and ethics across all departments at her university.

Melba is a fierce advocate for the LatinX, Disability, and other marginalized communities and cultures. She identifies herself as “A person who opens doors” for others who work hard to achieve their goals. The enthusiasm she brings to her field and to conversations is uplifting and exciting. You can just about see her, over the phone, jumping up and down.

Driven by a philosophy developed by Jose Vasconcelos called “Happy Pessimism,” Melba accepts her blindness. She doesn’t expect the best, but she expects to work toward it. For example, Melba was afraid of dogs her entire life. Now, she is working her first guide dog, Chad, a yellow lab - an experience that has changed her life 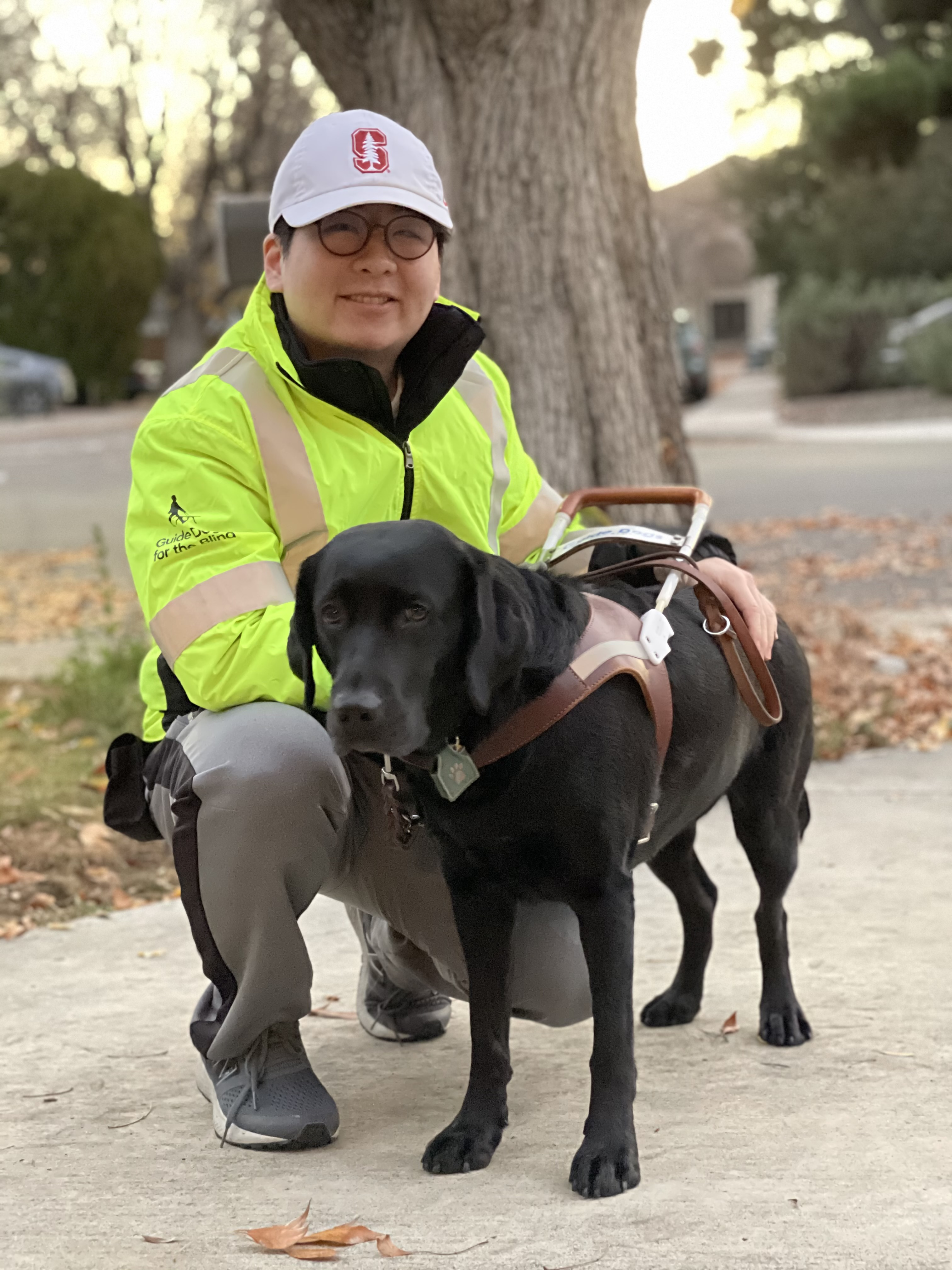 Chris Yoon works as a Program Manager for Microsoft and lives in Bellevue WA. He is partnered with his first dog Sadie. Chris readily admits that one of Sadie’s “other duties as assigned” is to make sure he meets lots of people. And she of course has taken this assignment seriously. Chris was partnered with Sadie during his last year of graduate school at Stanford where he studied both computer science and music. His musical passion is theater production and conducting, but his work at Microsoft has kept him away from the music scene.

In whatever spare time Chris has, he works with a non-profit called TeachAccess that brings together industry, academia, and advocacy groups to address the educational gap in accessibility, helping students create a world where technology is born accessible.