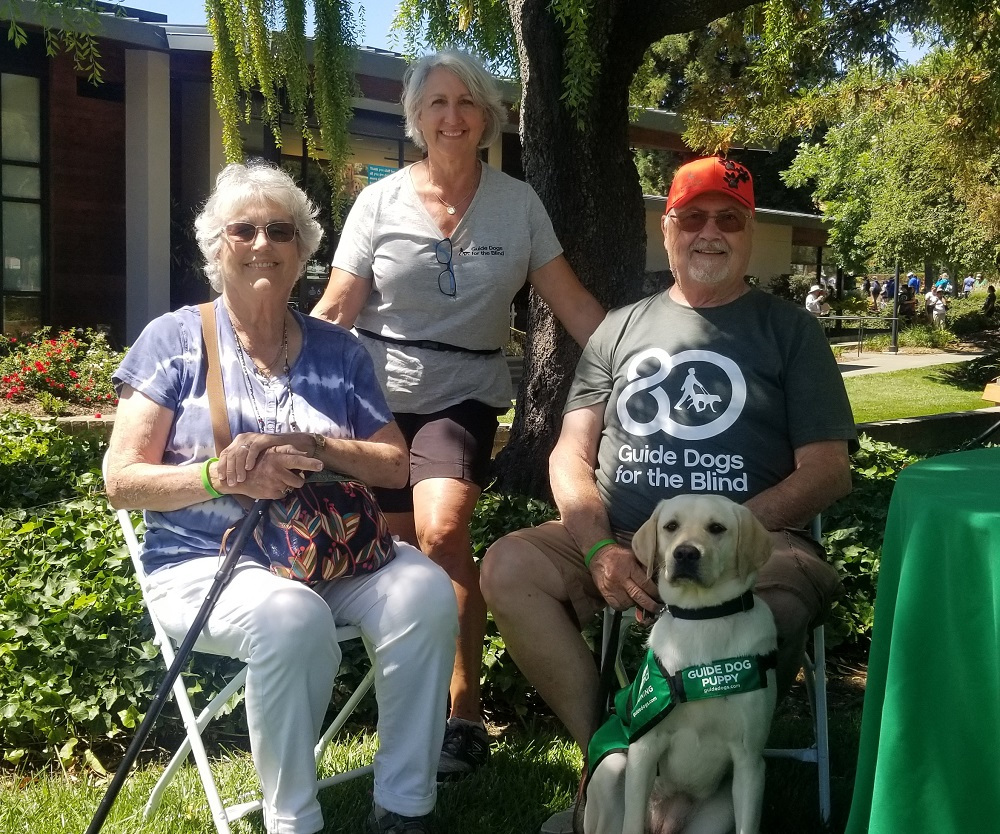 You could say Jack and Linda Brey have done it all as GDB puppy-raising volunteers. During the past 29 years, they have helped raise 51 guide dog puppies, and Jack has served as a puppy club leader for 25 years. The two became involved in 1993 when their daughter wanted to raise a guide dog puppy while she was in 4-H. "She got us going and we never stopped," laughs Jack. Their daughter went on to become an animal trainer at the Oregon zoo.

Linda and Jack are part of a vast network of GDB puppy-raising families who belong to puppy-raising clubs in ten western United States. Volunteer puppy raisers receive a pup when they are approximately 8 weeks old, teach them good manners, and provide socialization experiences for about the first year and half of the pups’ lives. The pups then return to our Oregon or California campus for formal training. Jack says about half of the pups they’ve raised have gone on to become guide dogs, breeders, or K9 Buddies. No matter what the future holds for the pups, Jack says he knows each dog will reach its highest potential and go on to change someone’s life.

Through the years, Jack and Linda have raised a variety of dog breeds including Labs, Golden Retrievers, Lab/Golden crosses, and even German Shepherds and Poodles (breeds no longer used at GDB). "We've done them all," says Jack. They adopted three of the dogs that pulled at their hearts after they were career changed. One dog, they say, came along at a time when their son was going through a particularly challenging time. "If he hadn't had that dog, we don't know if he would have navigated that time in his life as well," says Linda.

Currently, Jack co-leads the Santa Maria Puppy Raisers Club in California with Michelle McDonald and is co-raising a puppy with Ashley Robinson, age 14, who wants to be a veterinarian. "One of the big pluses of being a leader is to watch young people who are puppy-raising volunteers mature and grow in responsibility," says Jack. He says a couple of former puppy raisers have gone on to become veterinarians while another person trains animals for TV and movies. “We have another young lady who works at the Santa Barbara Zoo and an animal trainer at the Oregon Zoo and another young woman teaches orientation and mobility skills in Phoenix, Arizona. It's just fun to watch these young kids come at 14, 15, and 16 years old and grow up before our eyes," says Jack.

Jack and Linda both say they plan to continue volunteering with GDB in the years to come. "The great thing about Guide Dogs for the Blind is that everybody is nice. You meet so many friends and there's such a sense of community," explains Jack. “Even people you don’t know come up and greet you in the supermarket and thank you for raising a guide dog puppy. It’s really remarkable.”

That sense of community was on full display when GDB board member and client Amit Ahuja gave Jack, Michelle, and fellow members of the Santa Maria Puppy Club, a tour of the UC Santa Barbara campus where he is an associate professor. "What a nice, nice man," remarks Jack who says club members were thrilled to meet Amit after hearing his interview on GDB's Central Bark podcast. Walking around the campus with Amit and his guide dog Tashi, a black Lab, club members could see some of the training techniques they employ as puppy raisers on full display.

In fact, Jack says while the puppies entice people to volunteer, it’s the people that make GDB such a special place. "Especially now, it's nice to see in our society now how people can be kind to each other. We all have different things going on, but we're all kind and understanding to one another. It's awesome!"

Click here to learn how you can become a puppy-raising volunteer.

Click here to learn the many ways you can support GDB